Introduction: Freedom of Expression on Trial in China

On Christmas Day, 2009, a court in Beijing convicted Liu Xiaobo (刘晓波), a prominent intellectual, of “inciting subversion of state power” and sentenced him to 11 years in prison and two years of deprivation of political rights. The verdict cited as evidence passages from six essays Liu published online between 2005 and 2007and his role in drafting Charter 08, an online petition for democratic reform issued on December 9, 2008, which has since garnered more than 10,000 signatures, predominantly from Chinese in China. On February 9, 2010, a higher court rejected Liu’s appeal and upheld the verdict.

Liu Xiaobo’s case elucidates one of the most crucial challenges facing the emerging Chinese civil society: the struggle for freedom of expression. The outcome of Liu’s case has made clear the authorities’ willingness to trample on a fundamental human right protected in the Chinese Constitution and enshrined in international human rights law.

This issue of China Rights Forum focuses on Liu Xiaobo’s case and presents the six essays by Liu, Charter 08, and the complete set of available legal documents of the case, in both their original Chinese texts and translation by Human Rights in China.

In his essays, Liu not only offers his criticism of the regime and puts forth proposals to transform what he sees as a profoundly broken system, he also reflects on the history of the relationship between the ruler and the ruled in China and urges the Chinese people to awaken from a supplicant mentality shaped by a system that has essentially infantilized them.

Together, these documents provide critical insights into a clash of visions between Liu Xiaobo along with the more than 10,000 signers of Charter 08, pressing for a democratic China governed by genuine rule of law, and the Chinese authorities, who demonstrate time and again their intolerance for diverse views and their extreme need to maintain control at all cost.

Liu Xiaobo’s conviction and draconian sentence send a warning message that peaceful expressions of dissatisfactions with the regime or suggestions for reform will be treated as grave state security crimes.

We hope that readers will find these documents a useful resource for better understanding not only Liu Xiaobo’s case, but the broader human rights challenges in China, and their implications for human rights on a global level. 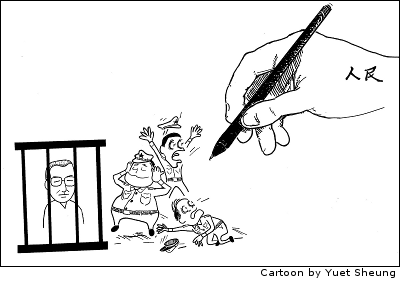 Part I—“Inciting Subversion of State Power”?—includes the six essays by Liu Xiaobo and Charter 08, which were cited in both the indictment and verdict as evidence of Liu’s crime.

In these essays, and in language that has obviously infuriated the Chinese authorities, Liu speaks out against a regime that sustains power through violence while demanding love and loyalty from the people and one that worships money and thrives on ideological and legal obfuscation: “Driven by profit-making above all else, almost no officials are uncorrupted, not a single penny is clean, not a single word is honest.”

Perhaps Liu’s most poignant critique is directed at the Chinese people themselves. He admonishes them for what he sees as their indifference to—and even complicity in—their own oppression: “After the collapse of the Qing dynasty and especially after the CPC came to power, even though our countrymen no longer kowtow physically like the people of old, they kneel in their souls even more so than the ancients.”

Liu Xiaobo is a principle drafter of Charter 08. The document is an appeal for fundamental political transformation. It warns that the prolonged authoritarian grip on political power has resulted in “moral bankruptcy, social polarization, abnormal economic development, [and] destruction of both the natural and cultural environment” and that “the intensification of antagonism between the government and the people…indicate[s] a catastrophic loss of control in the making.” The authors outline the foundational principles—freedom, human rights, equality, among others—and 19 essential features of a new, democratic government, including legislative democracy, judicial independence, urban-rural equality, freedom of association, assembly, expression and religion, social security, and transitional justice. The Charter was released online on December 9, 2008, one day after Liu was detained.

In their argument at trial, Liu’s defense lawyers pointed out that the articles and Charter 08 were posted on websites based outside China, not accessible by people inside China. The court’s verdict itself even provided the total number of clicks, as of December 23, 2009, on the articles and Charter 08 as 7,361 (with clicks on specific items ranging from a low of 57 to a high of 5,154). Even if all the clicks were made by Chinese citizens inside China, and even if each click represents a different visitor, the total number of people is an infinitesimally small portion of China’s population of 1.3 billion. If 7,361 people reading these documents can in the view of the Chinese authorities, pose such a grave threat, what does that perception say about the sense of security among those in power?

Part II—“Freedom of Expression on Trial”—presents the legal documents of Liu’s case: indictment, defense statement of the first instance trial, Liu’s self-defense and concluding statements at trial, the verdict, the appeal statement, and the appeal decision. These documents provide an important case study on the development of rule of law in China by offering 1) a clear view of the authorities’ politicized use of the judicial decision-making process, and 2) a glimpse of how rights defense lawyers in China construct legal arguments not only on the basis of Chinese law but also by invoking international human rights norms and principles.

Part III—“Freedom of Expression across Borders”—highlights the power of international solidarity and the voices that cannot be silenced. In an interview with HRIC, Václav Havel, a drafter of Charter 77, a manifesto for political reform in former Czechoslovakia, shares his insights into the difficult process of democratic reform in communist systems and the important role of the international community, and conveys his support to Liu and his family and other rights defenders in China.

In an effort to prevent independent voices from being heard not only inside but also outside China, the Chinese authorities twice barred Liao Yiwu (廖亦武), poet, writer, musician, from traveling to Germany, to attend the Frankfurt Book Fair in October 2009 and lit.Cologne, a literary festival, in March 2010. Liao defied the attempt to silence him by writing letters to German Chancellor Angela Merkel and to his German readers. His letters under-score what is at stake if the international community succumbs to China’s bullying: the undermining of international human rights values and a ripple back effect of reinforcing censorship and the chilling of civil society voices in China.

With this issue, HRIC is also pleased to announce the launch of an expanded online edition of the China Rights Forum, which will introduce new resources and interactive features. We look forward to the feedback and active participation of our readers.